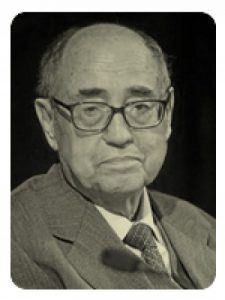 Salvador Reguant was born on the 24th December 1928 in Súria, in the region of Bages. Although his life and career was based elsewhere – between Vic and Barcelona – he always felt very close to Súria, a feeling reflected in an emotional tribute to his hometown he made in 2009, after having been awarded the Bages Culture Prize in 2005.
Salvador Reguant spent his childhood in the area of Cardener. He then went on to study at the Seminary of Vic, where he completed his ecclesiastical training between 1943 and 1953 and was ordained as a priest in his final year. A little later he started at the University of Barcelona, where in 1957 he was awarded his degree in Geological Sciences.
On the 5th September 1997, as part of a Congress on Geology, the recently recognised University of Vic dedicated a tribute to Reguant in the Sala de la Columna of the Vic town hall, accompanied by the book Homenatge al Dr. Salvador Reguant i Serra (Tribute to Dr. Salvador Reguant i Serra) about Reguant’s life and career, published by Eumo Editorial and thanks to Consol Blanc, Pere Busquets and Josep Serra-Kiel. In the book, our greatly missed colleague (and for me particularly, unforgettable teacher) Oriol Riba writes about Salvador Reguant’s undergraduate studies:

“My friend Reguant, along with three other students, was one of the first to matriculate in the new degree of Geology (established by royal decree on the 29th August, 1953), and was also the first to graduate in 1957, with all the honours of a brilliant student and worker” (…)

“Reguat inaugurated the new degree in Geology when he was professor of sciences at the Seminary and various other schools in the city of Vic, a task when he continued to undertake in the city until the year 1969. He and his fellow students were true pioneers”.

Nine years after completing his degree, in 1966 Salvador Reguant presented his doctoral thesis on “The Middle Eocene Stratigraphy of the Plains of Vic” at the University of Oviedo. The reason that Reguant was in Oviedo was because of his thesis director, Carmina Virgili (dep), another unforgettable figure in geology and in the Royal Academy of Sciences and Arts of Barcelona, who joined as professor of Stratigraphy at the University of Oviedo in 1963. As Carmina Virgili herself writes in the book mentioned above:

“When he (Salvador Reguant) started (his thesis), Stratigraphy still did not exist in Spain as a professorship nor specialism. Oriol Riba and myself had already completed our theses on Stratigraphy several years before, although as part of the department of Physical Geography. As always, reality, life, developed much faster than bureaucratic structures” (…)

These were the beginnings of a brilliant and extensive career in university as professor and researcher, leading Salvador Reguant to become a scientific collaborator of the CSIC from 1963 to 1972. In 1972 he became a professor at the Faculty of Geology in the University of Barcelona, where he then became professor of Stratigraphy and Historical Geology in 1982.
Trajectory
Salvador Reguant specialised in the research and teaching of historical geology, regional geology and the conceptual problems in geology and its relationship with dissemination and scientific understanding. As a researcher he worked in stratigraphy, palaeontology and language and communication in the geological sciences. Author of more than 200 publications, he excelled in the study of tertiary stratigraphy, specialising in the Paleogene period in the north-east of the Iberian peninsula (Catalonia, the Ebro Delta and the Pre-Pyrenees), the palaeontology of the bryozoans, biostratigraphy and chronostratigraphy.

Expert in geological correlation, he published “A table of geological time” (1986) with Oriol Riba, the first historical geological manual in Catalan. He is also the author of several titles, Historical Geology (Ketres, 1986), Geology of the Plains of Vic (Patronat d’Estudis Ausonencs,1986), The Geological Heritage of Catalonia (Enresa, 2001) and A History of the Land and Life (Ariel, 2005).
Reguant was director of the Spanish representation of the International Union of Geological Sciences (IUGS) and secretary and president of the Spanish committee of the International Programme of Geological Correlation, sponsored by UNESCO and the IUGS itself. He was also a member of the international Subcomission on Stratigraphic Classification (1975) and the international Subcomission on Paleogene Stratigraphy (1976-1980).
Salvador Reguant was accepted into in the Royal Academy of Sciences and Arts of Barcelona on the 24th October 1991, joining the Department of Earth Sciences, with a speciality in Historical Geology. In his speech “The Cycle and Evolution of Historical Geology” provide a supporting statement Dr. Lluís Via Boada.
He was also a member of the Institute of Catalan Studies (1986), in the Department of Science and Technology, acting as vice-president (1991-1992 and 1995-1998) and secretary (1989-1991) of the board. He made a significant contribution to the normalisation of scientific terminology in Catalan, which led him to the position of the Catalan Society of Terminology (2002-2004). Reguant was president of the Catalan Institute of Natural History (1984-1986) and member of the “Commission for the Encouragement of Scientific Culture” of the Catalan government (1989). He was also the founder (1999) and the first director of the magazine Contributions to Science, a magazine in English published by the Institute of Catalan Studies to disseminate the multidisciplinary science developed in Catalonia.
One of the most highlighted aspects of the rich and varied personal and professional life of Salvador Reguant, was, without a doubt, his dedication to university management. In 1977 he was appointed the first director of the University School of Teachers in Osona, the future University of Vic, which in 1999 awarded him the Medal of Honour, the highest recommendation of the institution. Ricard Torrent, who was the first rector of the University of Vic, remembers him in an emotional obituary (“Goodbye doctor Reguant, university”) and shares a significant detail about the personality of Salvador Reguant. Torrent describes that Reguant shared with him:

(….) “the great idea that Science with a capital C was the key to humanisation and that University is the lock”.

In the University of Barcelona, Reguant occupied the two positions of dean of the Faculty of Geology (1978-1984) and president of Division III of Experimental Sciences and Mathematics (1986-1989). Speaking of his contribution to the management of UB, the kind words of two ex-rectors Josep M. Bricall and Antoni Caparrós (dep) mention him in the chapter titles of the book published by EUMO Editorial mentioned above: “To Salvador Reguant, with friendship” and “Salvador Reguant: an institutionally committed scientist”, respectively. In the latter chapter, Antoni Caparrós writes:

“The deanship of Reguant was an important landmark in the process of renovating the UB towards democratic, scientific, Catalan and autonomous normalisation led by Badia and his team. Geology was one of the first faculties which was integrated in this process and – in doing so – opened the way for other faculties.” (…)
(Reguant) “was a model dean and a member of the board, who was perceived by the rest of the members as exemplary in his display of moral authority, reasoning and independence of judgement.”

This appreciation was largely shared by the members of the Faculty of Geology, in spite of the (in theory, insurmountable) differences in ideology and age. A fact that in itself, speaks of the disposition, integrative skills and conversation of Salvador Reguant, which in the turbulent political environment of universities at the time (we’re talking about the period 1978-1984), was nowhere near easy. Even less so for a priest, who from the beginning, had to overcome the sectarian and anticlerical prejudices of the radicals.
Humanist
Scientist and humanist, Salvador Reguant was also interested in subjects on humanist and religious frontiers. As Carmina Virgili stated in her article “The scientific thinking of Salvador Reguant”:

“To take the different facets of a person with all his riches and nuances is always complicated, above all if it’s about a person so rich in personality and complex as our friend Salvador Reguant” (…)
“The different faces of a crystal cannot be analysed separately, for the characteristics of each one of them – in shape and size – are revealed to us via the rest of the faces which surround them. The same happens with human beings. It isn’t possible to talk about Salvador Reguant as a university professor without talking about the research side of his life, which is clearly marked by his theological thought and without a doubt, is conditioned by his training in geology”.

Goodbye
Our colleague and friend, Salvador Reguant y Serra, died last February 23rd, at 87 years old. He was, first and foremost, my professor at the Faculty of Geology at the University of Barcelona for nearly 45 years, and secondly, over the years, my teacher, colleague, mentor and friend. It just so happens that it was Salvador Reguant, in the same room (at the Royal Academy of the Sciences and Arts, 19th May 2016), now more than 6 years ago, provide a supporting statement to my inaugural speech to the Royal Academy of Sciences and Arts of Barcelona.
Thank you Salvador… Rest in peace.
Acknowledgements

This biography was written by Dr. Mariano Marzo, Professor of Stratigraphy at the Faculty of Geology, University of Barcelona. 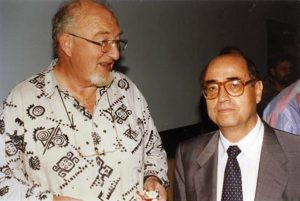 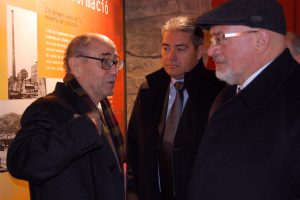 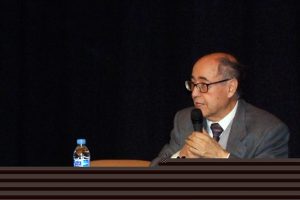 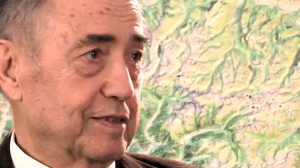 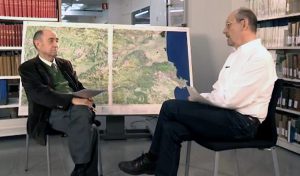 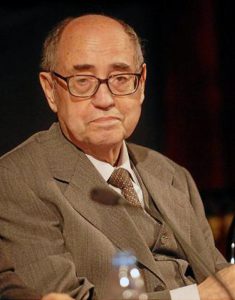 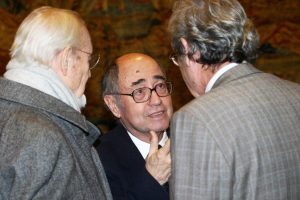 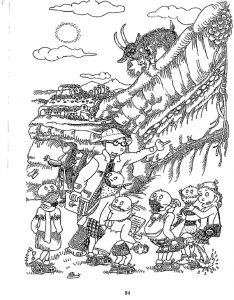 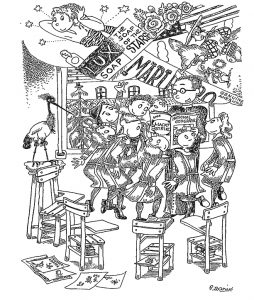