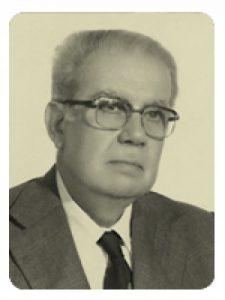 Engineer and professor of electrical engineering  at the Technical University of Catalonia (UPC). A beloved professor, a renowned  engineer and a respected academic figure, Enric Ras i Oliva led engineering  beyond where it seemed possible to when he began to practice it, amidst the  Spanish Civil War. Involved not only in his work, but in the development and  the future of engineering in Catalonia, he also managed to emphasize the  importance of the social and ecological responsibility it entailed.

In his secondary education, completed in Tarragona, he already stood out as one of the youngest high school graduates in Spain, and with the best grades that could be obtained. He continued in this advanced position to university, obtaining his degree in Industrial Engineering in 1936, two years earlier than usual. As for many other professionals, the Spanish Civil War meant that the development of the field in general, and in particular of his own career, slowed down significantly.

Despite all, at the end of the war he completed the studies he had started in parallel to those in engineering and graduated in Mathematics. During the war he worked at Suministros Aeronáuticos (SAF3), then at Fibras Artificiales and in 1942 he joined AEG Ibérica de Electricidad , first as head engineer and later promoted to manager and national technical director. This responsibility, carried out simultaneously with the management of AEG Industrial's motors, transformers, and switches factory on two occasions, entailed a great dedication and prevented him from accepting other positions of greater importance at the university or in other institutions.

But this did not prevent him from being constantly active in several organizations. He held various positions in the Association of Industrial Engineers of Barcelona, was a member of the Catalan Institute of Engineers since its creation in 1985 until 1995, was one of the founders of the journalNovatecnia and participated continuously in debates, conferences and writings on the social and ecological responsibility of engineering. To cite just a few: the General Meeting of the International Electrotechnical Commission (1959), the World Electrotechnical Conference in Moscow (1977) or the International Conference of Major Electrical Networks, of which he was a permanent member from 1951 to 1955 and on many occasions a representative for the Technical University of Barcelona.

Some of his writings are unsettling by how current the ideas they express are. We can confirm it in this text from 1983 which he read in the inaugural session of the 1982-1983 academic year of the Institute for Catalan Studies, "In the middle of a crisis of Western culture, most countries have entered a time tunnel of generalized darkness. But let us remember that crisis according to Greek etymology (krisis) is ‘decision.' One can live in permanent crisis without it necessarily incurring in illness. The illness often comes from the accumulation of problems due to postponing decisions. A fact that worsens with the rapid pace of progress."

To the virtues of Ran i Oliva as an engineer and as the right hand of many institutions and businesses, the impact of his personality to those who knew him must be also considered. The words that Joaquim Agulló, member of the Science and Technology Section of the Institute for Catalan Studies, dedicates to him in the obituary published in Contributions to Science (2010) are testimony, "Enric Ras was an exemplary teacher and one of the great minds in engineering, yet he did not ignore his social environment. The emphasis during his childhood on social responsibility and the predominance of culture and justice were far-reaching throughout his life. His writings on the environmental responsibility of the engineer made him a pioneer in his inclusion of ecology and sustainability in the field of industrial engineering."

As his career and his reputation within the entire sector grew, so did his immersion in the academic field. In 1944 he began very important work as professor in the School of Industrial Engineering of Barcelona, obtaining in 1958 the chair of the Department of Electrical Engineering, and becoming one of the best known professors at the UPC. He also dedicated part of his time to writing textbooks, "meticulously edited and considered classics in the field of electrical engineering," as stated by Josep Amar i Girbau, doctor in industrial engineering from the UPC. Indeed, these books won the award to the most relevant technical book issued by the National Association of Industrial Engineers.

Teaching was supplemented with several positions in the university's management. In 1960, he was also elected academic member of the Royal Academy of Sciences and Arts of Barcelona, where he held various positions over the years. Member of the Institute for Catalans Studies (IEC) since 1978, and Fellow since 1981, he was the IEC's representative at the Interuniversity Solar Energy Group. His contribution to several entities and associations related to science continued on different levels. When the Generalitat's (Autonomous Government of Catalonia) Scientific and Technological Council was created, he was named vocal member and was also a member of the managing and later of founding board of the Catalan Institute of Technology and the Catalan Institute of Inspection and Technical Control, and a member of the Monitoring Commission of the Agreement between the Autonomous Government of Catalonia and the Institute for Catalan Studies (1989-1992), as the IEC's representative.

Throughout his life he received numerous honors and awards. Among others, the Great Cross of Alfonso X the Wise, awarded by His Majesty the King of Spain (1985); the Narcís Monturiol Medal for scientific and technological progress, awarded by the Autonomous Government of Catalonia (1986), or the Cross of Sant Jordi Award of the Autonomous Government of Catalonia (1990). It is worthwhile to end this text with some of his own words and the philosophy they transmit, a great way of understanding the energy that accompanied this exceptional engineer throughout life. "Today we know that both individuals and cities have great potential reserves of creation and will that lay asleep, and it is healthy to put them into action. If people become convinced of this, we will have found a resource to combat the degrading anguish of the times in which we live. Certainly we must educate our ability to adapt and change. And have decision and good sense to avoid traps; but without risk there is no progress."