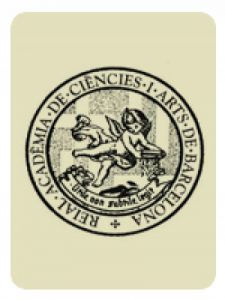 He was born in Torroella de Montgrí on December 1, 1812, the son of Jaume Giró and Úrsula Aranols. The couple lived in Torroella, where their father worked as a tailor, and later the whole family moved to Figueres, their mother’s hometown, where Andreu studied primary and secondary education.
In 1830, he enrolled in the drawing schools that the Junta de Comerç maintained in the Llotja de Barcelona. He studied drawing, winning several prizes and a medal, and at the end he expanded his knowledge with courses in mathematics, logic, grammar, geometry, physics and others.
It was a turbulent time in the industrial world. The Junta de Comerç had been actively involved in the creation of many technical schools: nautical, shorthand, drawing and fine arts, mechanics, physics, chemistry, etc., thus making up for the lack of a university in Barcelona.
His extensive knowledge meant that many Barcelona institutions required Andreu Giró i Aranols to be part of its board of directors or its teaching staff. He was a professor of line drawing at the College of Humanities of Carles Carreres i d’Urrutia, at the Escoles Pies, at academies of fine arts, etc., until 1851 when he was appointed professor at the Escola Industrial.
In 1862 he obtained the title of Industrial Engineer in the specialty of Mechanics. In 1864 he taught line drawing at the School of Fine Arts of Barcelona. In 1873, he married Magdalena Flores. In 1877 he had a stroke and in 1883 suffered a relapse. He retired the following year, in 1884. On August 10, 1884, he died in the village of Sant Gervasi de Cassoles (Barcelona) where he lived temporarily.
Institutions of which Andreu Giró was a member throughout his life:
In 2012 the Library of the Reial Acadèmia de Ciències i Arts de Barcelona dedicated the display case of the reading room to Andreu Giró i Aranols (1812-1862) and Llorenç Presas i Puig (1811-1875), Numeraries of the Science Section Physicomathematics, in commemoration of the bicentenary of his birth.

This biographical note has been made thanks to the article by Joan Radressa i Casanovas (Llibre de la Festa Major de Torroella de Montgrí, [en línia], 2019, p. 3-7) and to the documentation of the Royal Academy of Sciences and Arts of Barcelona.